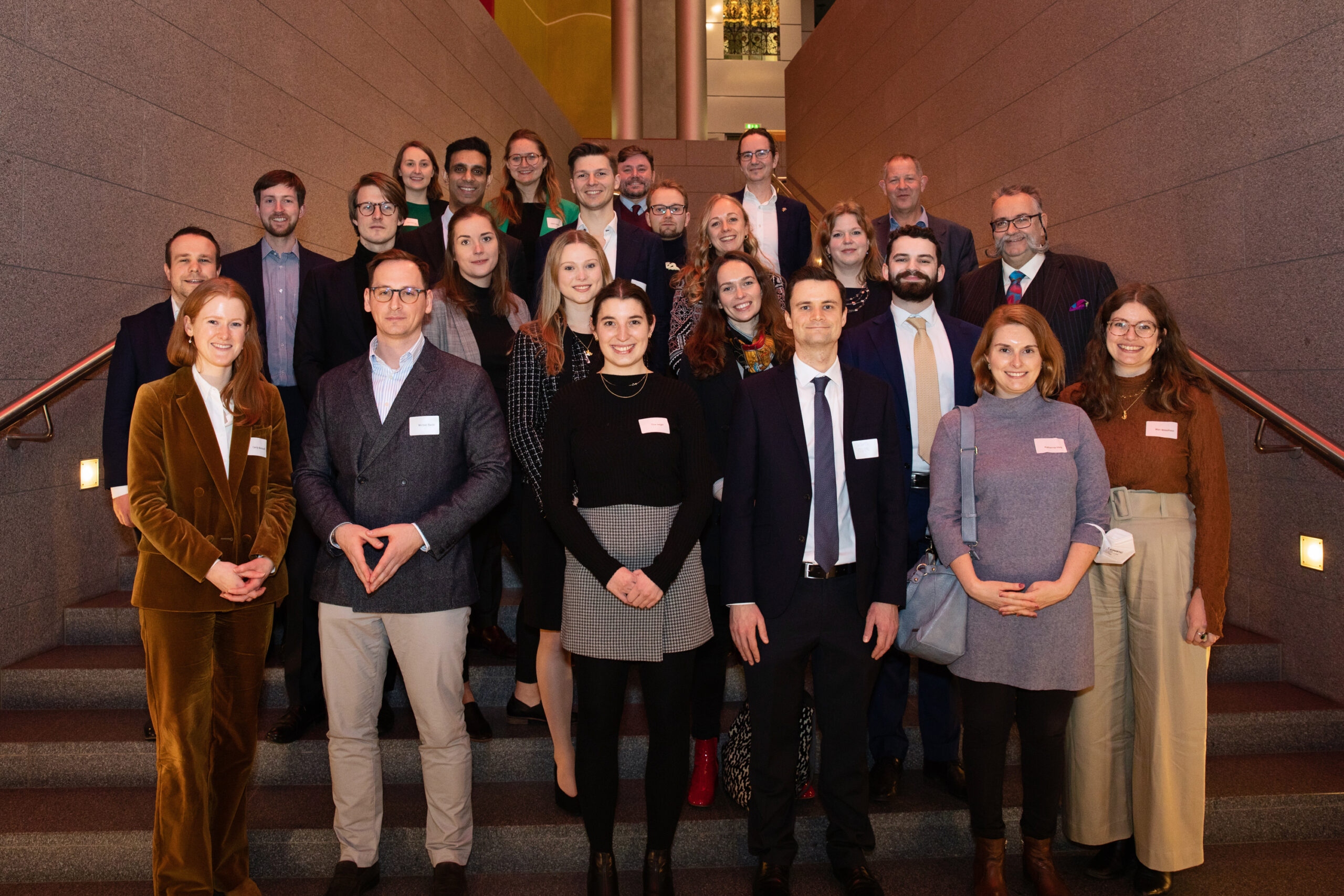 The Young Königswinter Alumni Climate Conference took place on the 1st of March 2022, having been postponed from December due to the emergence of the Omicron wave. 34 Young Königswinter Alumni from the 2021 and 2020 cohorts (as well as several from earlier years) met at the Axica, the British Embassy and on Zoom to discuss the question “Post COP26: How can our economies and societies adapt to a net zero world?” 24 alumni met in person, seven of them from abroad, and the remaining ten joined via Zoom, as did four speakers.
The event began in the Sky Lobby at Axica and participants were welcomed by Thomas Matussek, former ambassador to the United Kingdom and chairman of the Deutsch-Britische Gesellschaft e.V., and Julia Rawlins of the Young Königswinter Alumni e.V.. Journalist, author and executive director at Chatham House John Kampfner, who also chaired the Young Königswinter Conference 2022, chaired the panels and discussions.

The first panel was titled ‘Challenges and opportunities for carbon neutral mobility in the 21st century’. The participants were Isabell Eberlein of Veloberlin, Katharina Hock of Daimler AG, and Jon Worth of the Trains for Europe Campaign.

The second panel was titled “Between climate justice, generational and regional divides: how do we get everyone on board for the fight against climate change?” This began with an introduction by Professor Johannes Vogel, from the Museum für Naturkunde Berlin, about the museum’s role in the Fridays for Future protest. The participants in this discussion were Pia Jorks (Youth Expert and Advocate for International Climate Policy, Hertie School, Klima-Allianz Deutschland), Shruti Suresh (Global Witness), Simon Wehden (Klima-Mitbestimmung JETZT e.V.) and Ben Westerman (British Chambers of Commerce, Green Alliance and UK Parliamentary Renewable and Sustainable Energy Group).

The final discussion was between Henning Höne MDL (FDP), Caroline Russell (London Assembly Member, Green Party) and Katharina Schulze MDL (Alliance 90/The Greens). Following this final discussion, the group moved to the British Embassy for a drinks reception, with a welcome by Kieran Drake, the Deputy Head of Mission.
By the time the conference had started, COP26 and the resulting decisions had understandably moved away from centre stage due to the invasion of Ukraine a mere seven days before but the consensus among the participants remained that climate change and climate justice are topics of the utmost importance. Climate policy now more than ever is also security policy, and both areas are well-suited to bilateral cooperation.

This conference was organised in cooperation with the Young Königswinter Alumni Organisation and the British Embassy.

Below are some impressions from the event.
Photography by Andrew Grauman.