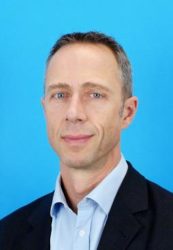 Prior to assuming his current position in June 2018, Dominik Mutter was Head of Division for North America at the German Foreign Office.
His previous postings with the Foreign Office include three years at the European Affairs Directorate (2001-2004); a posting to Cairo, Egypt (2005-2007); two years at the Federal Chancellery’s Foreign Policy Directorate (2007-2009); and four years as the Deputy Head of Division for Parliamentary and Cabinet Affairs at the German Foreign Office (2009-13). From 2013 through 2017, he served as the Deputy Head of the Political Section of the German Embassy in Washington, DC, responsible for U.S. domestic politics.
Mr. Mutter holds a Master’s Degree in Modern History, American Studies, and Political Science from Freiburg University, Germany. As a much younger man, he spent a year as an exchange student at a high school in the western part of New York State (1988/89), and later a year at Georgetown University’s School of Foreign Service (1996/97). He is an alumnus of the Munich Young Leaders and the Austin Forum for Diplomacy and Statecraft.